Definition of complete, incomplete, codominance, pseudo-dominance. Correspondence with mutations in the zebra finch.

Currently we still call it dominant and recessive. However we do know that Mendel discovered "complete dominance". There are indeed other forms of dominance. We already know these forms so we will mainly bring a few provisions to remember.

This blue and brown are genetically called “alleles” for eye color. Alleles are the different values that a gene can take. For eye color, the brown allele dominates the blue allele. Blue is said to be "recessive".

Note that we are still talking about a single gene. The concepts allele, dominant, recessive only make sense in the context of a single gene. An allele can also have several values: The eyes can be brown, green, blue. From a pair of 2 genes with the same allele value (eg 2 x brown) we will say they are: Homozygous. In the presence of 2 different alleles (eg 1 x brown and 1 x blue) we will say "heterozygous" for the gene for the color of the eyes.
The genes are therefore concerned with the color of the eyes, the color of the legs, the size of the beak ... These eyes, legs, beak are the effects of these genes. The effect of all these genes in all cells is called the phenotype: That is, the appearance of the creature. The values of these alleles of the genes of this being is called a genotype.

In this form of dominance, the phenotype of a heterozygote is intermediate between the two different alleles. Many call it a mixture of alleles. This phenomenon occurs more frequently in the world of plants. In plants like snapdragon where the red and white variants exist, we also find the pink variant. Homozygous flowers are either red or white. But the red allele is dominant over the white allele, and manifests as a pink flower in the heterozygous variant. In this case, we speak of "incomplete dominance".

This form is similar to the "incomplete dominance" form. But the effect on the phenotype is entirely different. The two alleles are expressed in co-dominance. In human blood, there are three variants: A, B and O. The A and B alleles are dominant. The O allele is recessive to A and B. These A and B alleles provide a different antigen on red blood cells. A person with group AB (heterozygous A and B) has red blood cells with one type A antigen and 1 type B antigen in the same cell. Note here that A and B are present in the same cell (see illustration).

Note: Antigens are molecules that are able to induce a response in the immune system. This is the reason why the recipient's blood type must be known. If he receives a group other than his own, then the blood received is attacked by his own immune system. 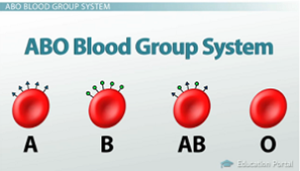 In full dominance, we gave the example of eye color: The color brown supersedes other blue or green possibilities in the phenotype. Only a subsequent crossbreed (and its results) could give a definitive answer as to whether those brown eyes were hiding blue or green.
With pseudo-dominance, we see the same effect in the phenotype. The result is the same: One allele suppresses the effect of the other. So where is the difference? If one of the alleles (usually the dominant one) is coupled with a lethal factor then pseudo-dominance occurs. This phenomenon happens in Drosophila.

Drosophila are the favorite subject of heredity researchers. In these fruit flies there is a mutant with curly wings. The opposite shape has smooth wings. The "curly" allele is dominant over the "smooth" allele. When we cross two subjects with the curly allele, in generation F2 we obtain: 2 young with curly wings and 1 with smooth wings. In the event of complete dominance we would have obtained 3 with curled wings and 1 with smooth wings. In fruit flies a lethal factor causes one of the young to die in the bud. Homozygous Drosophila with curly wings never exist. The distinction between complete dominance and pseudo-dominance, can only be established by a very serious precision at the level of breeding results, not only with regard to the hatched young but also the dead young in the egg.

Let's see what all this gives with our zebra finches :

1. Gray and brown : Gray is totally dominant over brown.
2. Pale back and masked : Pale back is completely dominant over masked.
3. Pastel : It is a factor (allele) that lightens the base color (gray or brown). Pastel is dominant over the base color. But the pastel creates an effect of mortality in the bud. The double pastel factor does not exist. Pastel is pseudo-dominant.
4. Black-face : Some fields of white feathers are changed to black / brown. The Black-face is dominant.
5. Gray and brown cheeks: Acts on the cheeks and also on the rest of the plumage. The Joue factor is completely dominant.
6. Other factors: Recessives such as white breast, black breast, isabelle, yellow beak, black cheek ...

In young people of heterozygous couples we can often see split (carrier) characteristics. So this is incomplete dominance.
So far we haven't mentioned white and variegated. The factor (allele) that plays a role in this case prevents another color from manifesting in the phenotype. This is called an "inhibitor". Given the effect of an allele (factor) in each cell (see above), this can therefore cause partially or totally white plumage (white or variegated). In a white or variegated, we do not speak of dominant but of prevention. White and variegated are recessive.

Note : With the general concept of "dominance" we are always talking about two alleles of the same gene. This in the whole of genetics. Black breast therefore cannot be dominant over orange breast, light back cannot be dominant over Black Cheeks ... We also know that several alleles can work together to achieve an overall result. Also know that a scale of variation is related to the development of a gene in the phenotype and that in this development; the environment (food ...) plays a role.

Luk LIEVROUW, selection amateur breeder and secretary of the BZC.
Article published in 2020.