History, study of the orange breast mutation in the zebra finch. Modifications and interaction with other mutations. The orange chest in competition.

Since we will be discussing the orange breast zebrafinch (PO) in this article, it is certainly interesting to dwell a bit on the history of this mutation first.
The orange breast mutation (PO) is believed to have originated in Belgium. I consciously write "supposed" because the first orange breast (PO) was actually found at a bird merchant. In Dutch literature in particular, long before the discovery of the first orange breast (PO) in Belgium, zebra finches were described there with characteristics that we can now attribute to orange breast (PO) wearers.
What we are certain of anyway is that the honor of the discovery of the orange breast (PO) goes to a certain Mr. De C. who in 1978 noticed a rather special gray male in a store. This male had an orange breast bar when normally it should have been black. Mr. DE C. bought this copy, but at the breeding nothing came out of what he had hoped for. At the end of 1978, Paul CH., President of the BZC at that time, acquired this male. There were good and bad surprises with this subject, because unfortunately this male did not live very long. Fortunately Paul CH. had been able to get some young people before. Orange breast (PO) is inherited autosomal recessively compared to the wild form. The orange factor must therefore be doubly present to become visible. He therefore crossed young people between them and quickly took out the first orange breasts (PO).

What do I mean by that? Often the orange chest gray or orange chest brown reveal not well defined cheeks. Likewise, there is often an orange hem on the fenders. Also, the chest frequently flows upwards and the belly shows patterns. All these observed characteristics are quite disturbing. 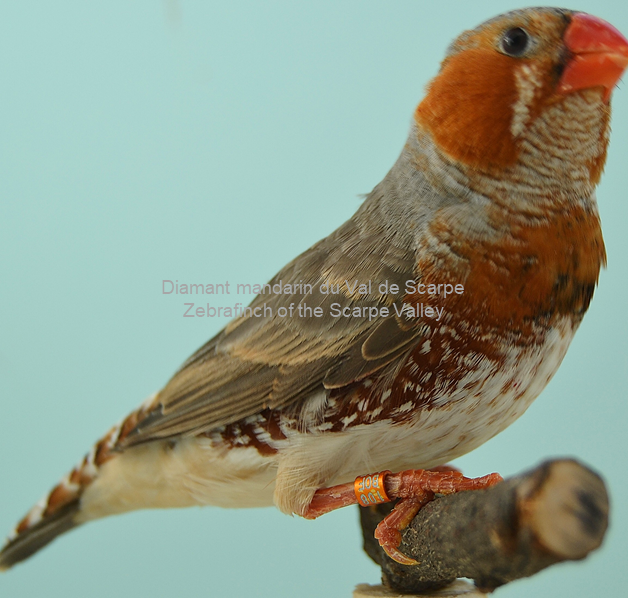 Before discussing these different points, it would be good to ask the following question: What exactly does the orange breast mutation do ?

The orange breast mutation converts eumelanin in the drawings to orange-brown pheomelanin.
In the current standard, this gives us the image of a male with orange beak and teardrop features, a zebra pattern and also an orange breast bar and an orange-white checkered tail design. The females are also easily recognizable by the presence of a slight orange reflection in the cheeks and the sides on which we can even find traces of the sides. The teardrop disappears in females.
In the early years of the mutation, all orange breasts had a small, but still very round head. Since a crossing-over must have played because these 2 factors (PO and small round head) have separated. In recent years we have also found orange breasts with other shapes of heads. Males split orange breasts can be recognized by the fact that they have orange feathers below the wings (non-determining index). In females with orange breasts, this is hardly visible, but the weak tear line suggests its genotype (beware, the same clue can be observed in black breasted carriers).

Until recently, I was personally convinced that the black chest was the culprit. But a few years of breeding with the orange breast brown, have taught me that despite all my repeated attempts to eliminate carriers of black breast from my orange breast breeding, in particular by repeatedly introducing pure browns, these annoying characteristics remained.
According to the laws of inheritance, these symptoms should have been reduced considerably by mating black breast x pure brown split which theoretically gives us 50% brown PN split and 50% pure browns. This method should result in an increasingly higher percentage of pure orange breast.

So I could conclude that the orange breast mutation not only transforms eumelanin into pheomelanin, but also interferes in the boundaries of the drawings. These annoying traces would therefore have their origins in the orange chest mutation itself. In fact, in the breeding of suits, don't we notice that the introduction of the orange breast reinforces the black breast and black-face mutations. Let's see a quick example here. A black chest with an all-black chest is practically untenable. Combine these with orange breast and the breast color will flow higher.

Did you notice, I just wrote "I could conclude" because as a breeder I have yet made other findings which suggest that the orange breast mutation has not yet been fully probed.

These findings are, namely, that there are orange-gray or brown breasted males with well-demarcated designs. On the other hand these specimens do not present orange stripes, but rather gray or brown stripes. They show a tricolor tail design namely white checkerboards and partially orange and dark brown or gray checkers.
In contrast, males without sharp design boundaries have more or less orange in the welts. Males that show a design on the belly, which is a fault with classic PO, have a white and orange stripe design. All these males with not well defined designs have orange-white tail blocks, however not well defined; the orange is draining.

By deduction, would the subjects with the well-defined drawing be the pure orange chest copies, while the others would be more or less split ?

When we analyze all of this data, then it is possible that a false standard has been determined and that the pure orange chest brown or gray (non-bearing) is a zebra finch different from that described in the standard. We would then have to accept that an orange zebra pattern and orange-white tail blocks are not tenable.
As a further argument I will add that this first subject from 1978, which I saw flying with my own eyes, did not have orange stripes, but rather light gray, and showed tricolor blocks.

Did the authors of the first breeding guidelines and the future standard have a vision that 20 years later still does not seem tenable ? There have already been precedents of this kind, and in particular with the orange breast. The Storm Chest females did not and still do not have a teardrop. However, in the first version of the standard a teardrop was written there. Quite simply since the males have one which drains in the cheek, it was thought that by selection we would obtain subjects with an orange teardrop, which however was not the case thereafter. Also in the current version of the standard the female orange breast should not show any tear. 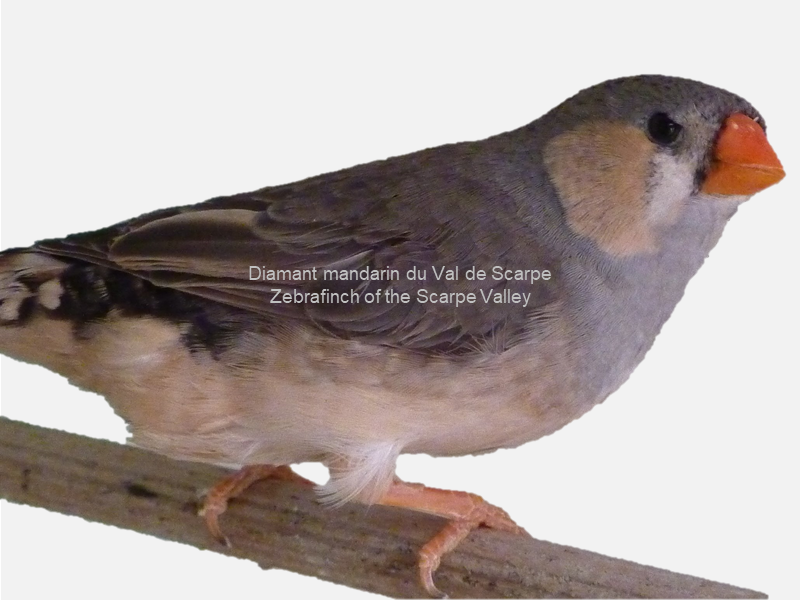 The domesticated zebrafinch has been farmed for more than a century. Zebra finches are raised in Australia, in our western world, in the east and in the far east, in South Africa? …. There are differences between zebra finches from all its regions, just think of the difference between English and Continental (cf. : What do we mean by zebrafinch "English type"? ). Do you know how many mutations are raised overseas? Do you still remember the orange cheek zebra finch? And we haven't said anything about combinations and combinations of combinations yet.

And we add another facet to this question. What is a standard zebrafinch, and does it exist? This is not a simple question. Because standards are made up of a lot of details about shape, design, color etc… They express many characteristics depending on many genes, combined genes and environmental factors in breeding. Hence, our idea regarding the standard of zebra finch: difficult to raise. Also, a zebra finch will never get 100 points in an exhibition. Or do we dream that it might be possible ?

To the question: “Does the orange breast type with an orange breast bar and gray or brown-black welts still exist?” I answer: yes !

There are still orange, gray or brown breasted males with a neat and aligned design. But which do not have orange stripes in the zebra pattern, but gray or brown. These specimens also show tricolor tail blocks, namely white blocks and partly orange and partly dark brown or gray blocks. Males, with overhanging parts, which do have orange to a greater or lesser extent in the welts. Orange-breasted males in classic colors, with an unwanted abdominal design, have orange-white welts. All these poorly drawn males also have orange-white blocks but not very clear, the orange is overflowing.

I have found in previous articles that it was said that there may have been a fault in the standard and that the pure orange breast in gray or brown, is a bird other than described in that standard. We should then have accepted that an orange zebra design associated with orange-white blocks was not possible.

The photo below, shows the guy's orange chest with gray welts, two-tone blocks, and a neatly demarcated chest bar and cheeks : 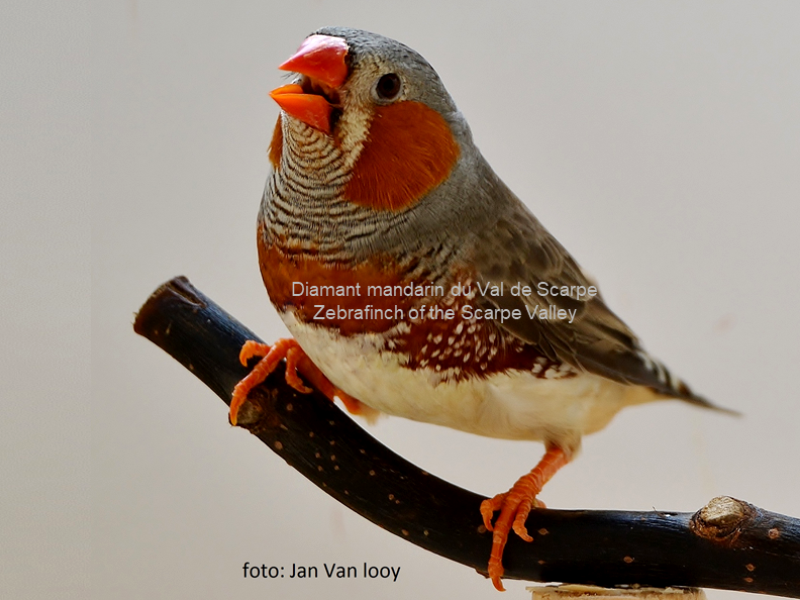 In zebrafinch with two-tone blocks and gray stripes, the aforementioned faults can be eliminated. I mean by breeding. In the early years, this guy was the enemy. It is a fact that in the meantime everything has mixed up and there are not many pure copies left.
The authors of the first lines of breeding and later of the standard requirements had an ideal picture, a picture which now, many years later, no longer seems achievable.