The weaning of young zebrafinch

Successfully weaning young zebra finches. From leaving the nest to autonomy. Behavior of parents, duration, tips, everything you need to know !

The young zebrafinch are now about three weeks old; seeking to escape the lack of space, the oppressive heat of the brood or simply wanting to discover the world, they will begin to emerge from the nest.
This outing is not definitive, as they still return for 2 to 3 days, but less and less often. Sometimes, when the young begin to grow up, one of them starts to fly out of the nest a few days before the expected release date, you can leave it out of the nest if conditions allow, the parents will continue to take care of it. If you need to put it back in the nest, place it gently preferably in the evening and keep your hand in front of the fly-off hole, until all the young have regained their calm.
One morning when all the young are out, the nest will be removed and cleaned before a new laying or in preparation for the next breeding season. The nest will be restored when the young are weaned and thus separated from their parents.

It is common for parents to start a new laying before the end of weaning the young. There are no rules on the matter: Sometimes the parents start hatching while taking care of the young that come out of the nest, sometimes they will pluck the young and stop taking care of them. It is up to the breeder to be attentive in his observations. At home, I prefer to remove the eggs laid on the ground to give them to another couple or to give them back to the couple after weaning when the timing allows.

The weaning period corresponds to the period when the young bird will learn to feed itself and thus acquire its autonomy. It is therefore a delicate period when it will be important to observe the birds so as not to make the mistake of separating a young person from his parents too early. Usually a young zebrafinch will be weaned around 35 days of life. Again, the observation is strict; and no need to take risks, it is a matter of a few days.

The young chicks were fed by their parents who regurgitated the seeds and/or mash that is distributed daily at this time. Now they must learn to peel the seeds and eat them alone. The sooner the chicks are self-sufficient, the sooner they will be weaned.
The parents themselves reduce the regurgitation of the pate.
But if young people feel the need they will go looking for it alone, it is easy to access food that will serve as a transition. In addition, some breeders provide young birds with sprouted seeds: These «soft» seeds are easy to peel and ingest. For my part, as soon as I leave the nest, the birds have at their disposal some millet in clusters (red and yellow that I alternate every day).

For the first few days you will be able to facilitate the access of young people to food by using small buckets not too high, lids with jars, small plate, ramekin placed in the bottom of the cage. Some breeders (including myself) do not change anything and keep the traditional feeders in place without observing any particular problems.

During the period of weaning, parents will continue to feed young people but less and less often. Be careful before separating young people from parents, to ensure that they eat well alone because a young person who has been abducted prematurely may not be well received if you give him or her back with his or her parents, especially if they have started laying eggs again.
When you remove your young, it may be wise to place them in an aviary with other young already weaned, or an old male, an old female so that they finish learning to feed themselves. Finally, some young people are later than others, so be careful.
At home for lack of space for the construction of aviaries, I use large cages of 1m20 for the weaning of the young it is just as effective provided to put fifteen young in cages. For the food, always millet in clusters for at least two weeks, as well as the «millade» (the millet that falls from the clusters that I collect from a local producer). For years I used to feed the weaned youngsters but it was a mistake because some youngsters prefer this easy food to eat and stopping the food was a concern for some.

During this same period, the young’s bill becomes coloured and its adult plumage sets in place. The beak lightens from the base to the tip to become pink, then will turn coral red for the males and pink red for the females.
The characteristic plumage of the males appears (flans, cheeks, throat, breastplate and breast bar). Some very intensive coloured birds already have the drawings as soon as they leave the nest: 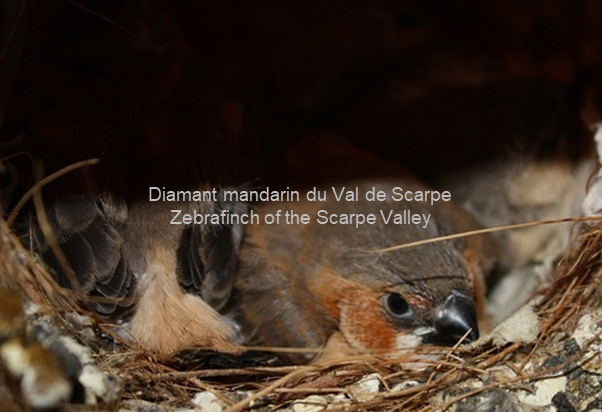 Towards the third month of their lives the young have their final plumage.

Various problems can be observed during this critical period of the zebrafinch life as a certain aggressiveness of parents towards young people. Often it is linked to the too great excitement of the couple who thinks more about reproduction than weaning for various reasons:

- Too much vitamin intake
- The search for materials for the next brood hence the pricking of the feathers of the young
- Attacks young to keep them away from the nest. That’s why I advise you to remove the nest a few days after the young come out.

But sometimes it will simply be due to the aggressive nature of the bird. They are not all identical!! Contrary to popular belief, some couples of zebrafinch are very bad feeders. It may sometimes be necessary to separate the couple (usually the female is left with her young). Some use cages with grid separations. Parents continue to feed the young through the grid.
But of course, one should not confuse with a slight aggressiveness aiming towards the end of weaning to repel young people so that they manage a little more alone. 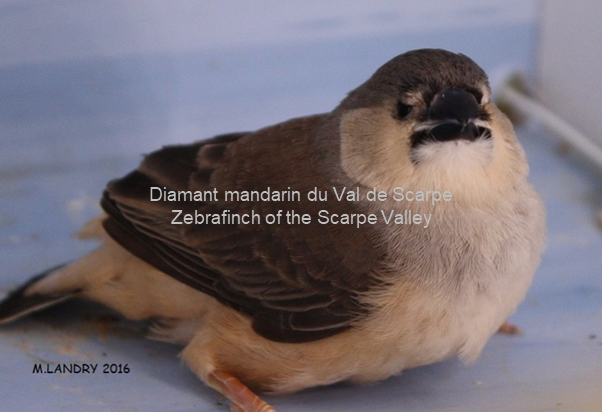 A few points that I think are important to summarize here:

- Hatching of young 12 days after start of hatching (usually from 3rd egg)
- Nest exit at approximately 20 days
- Weaning at approximately 35 days
- Available to the parents of the shepherd’s pie distributed daily. The pâtée is put in preparation, then at the birth of the young (not during the incubation)
- As soon as the nest leaves, always millet in clusters available to young
- Easily accessible food for youth
- An aviary or flight cage for the development of young bird muscles

And of course daily monitoring of the evolution of the autonomy of young birds.